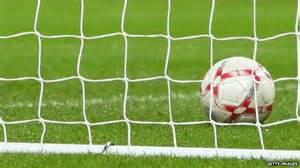 In football, as it is with many other games, the objective is to score more goals than the opposing side. There are different ways of playing football. Here are two:

In this first game of football the goals (not the goalposts, the actual goals that are scored) have to exist and you have to have a supply of them before you can play the game. You have to borrow the goals from a goal bank, which means that you have to return them later. And since you are making use of the valuable services of the goal bank you have to pay them a fee in goals for borrowing their precious goals. This is called interest. How large that fee is depends on how long you take to return the goals. This is quite legitimate for while you are using the goals the real owner of them is denied the pleasure of using them.

Who created these goals we don’t know, but as they have to be borrowed they must have been created, and if they were created then there must be a supply of them. A supply implies a finite number of them, for if there was an infinite supply they would be pretty worthless and the teams wouldn’t need to borrow any.

When your team goes out onto the field it has a supply of goals which it can use to pay the penalties the other team will demand if they should get the ball into your net. If your team manages to get the ball into the other side’s net they owe you one of their supply of goals. The scoreboard is a reminder of how many goals the teams owe each other at the end of the game.

If both sides score the same number of goals then everything is square and neither side owes the other any goals.

If there is an imbalance in scores, however, then the side that has the lower score must hand over to the other side as many goals as the difference between their respective scores.

The object of football is to come away from the game with more goals than the other side, so that one’s own side has more goals in the kitty than there were before the game started. This is so that the goals can be returned to the goal bank together with the fees the goal bank is demanding for borrowing them.

No one has yet worked out where the extra goals come from for both sides to pay their respective borrowing fees to the goal bank (the interest). Perhaps if everyone just plays better they will win so many goals that there will be enough to return the borrowed goals as well as pay the fees.

On the other hand, perhaps the goal bank can lend some more goals to the teams in shortfall?

As goals do not ‘exist’ there is no need to create them, and if something isn’t created then there can’t be a supply of them. It follows that if something doesn’t exist you can’t borrow it. That is absurd. The goals are just a count (score) of how many times the ball went into the net.

Thus it could be said that the side that scores a goal gets +1 points for doing that and the other side gets -1 points. When the side with -1 scores a goal it gets +1 points and that brings its score back to 0. The other side gets -1 points and that subtracted from the +1 they already have also brings their score back to 0. The scores are levelled and neither side is winning.

The side that ends up with a positive number of goals is the winner. That’s the end of the game and the winner goes home with the trophy and keeps it until the next match.