Free Yourself from the Grids! 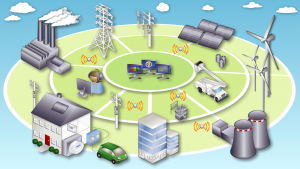 In last week’s post we discussed the notion of self-reliance. This week we continue along the same vein, but look at what it is that keeps us dependent and reliant on the unreliable reality that was once called “normal”.

Our dependency comes through our reliance on the various grids that make up the matrix woven around us. “Grids” here refer to the monopolies or systems that provide specific utilities and facilities in a particular area. The main grids are electricity, broadcasting, television, telephone, cellphone, internet, postal, water, sewers, roads, health, education, food, banking, transport, railway, airline, safety & security and entertainment.

These grids, public or private, once seemed monolithic and we never questioned them. But recently their fragility has become evident as they begin to unravel and we see how some of them have been used to monitor and control us. Reliance on fragile grids prevents resilience when they fail.

Not all grids are equal and some are relatively easy to get off. For example, it is possible to get off the electricity grid by installing your own power sources. Likewise, it is possible to get off the water grid by drilling your own well and off the education grid by doing homeschooling. Grids are not stand-alone: each one operates under higher level grids that link them and on which they are dependent. Utility service grids are dependent on the higher-level state grid, which is the grid that claims to own us. We believe that we belong to this grid because it calls us its citizens and provides us with the civic conveniences that we have become dependent on. We accept its decrees and are prepared to sacrifice our liberty for the “safety and security” it claims to offer. The recent “health crisis” affirms this.

Many of the grids that have sustained us are in a parlous state, some on the verge of collapse. If we remain dependent on them we will find ourselves stranded and without the means to sustain ourselves. The outermost grid that cocoons us all is the money grid. This grid binds us most tightly to the unravelling matrix. It is consequently the grid that is the most difficult to get off, and hence the one through which our lives are the most effectively controlled. The nature of this grid defines the nature of the society we live in.

It is not possible at this time to make a complete break with the money grid but we can at least begin to loosen the chains. We live under the illusion that the prime function of the money grid is to facilitate exchange. This is indeed one of its functions, but its main function is to extract value from those who produce society’s real wealth and divert it to the non-producing class. It is, more than anything else, a monitoring and control grid. Many are beholden to this grid because of debt; others because they believe it is the sole means of accessing the necessities of life.

To get off this grid we need to realise that there are many ways to facilitate exchange and that we are not obliged to use the monopolised state/bank exchange system (money). There is not and never should be a single replacement exchange system. That would replace the money grid with another monopolistic grid that would also fall under central control and be used to control and exploit us. We need to find as many ways as possible to exchange what we have and can do for what we need. The more ways there are, the less chance there is that the exchange process can be hijacked by special interests to impoverish and control us.

The Community Exchange System provides a range of tools to facilitate exchange but there are many others such as crypto-currencies, timebanks, community currencies and barter networks. Instead of a single method of exchange that distorts our relationships with those to whom we provide and from whom we receive, multiple methods allow us to adapt our exchange relationships to ensure more enduring social relationships. One-to-one relationships are different to one-to-many relationships; many-to-one relationships are different to many-to-many relationships. Different exchange situations require different exchange methods. For example, one-to-one social relationships among friends are strengthened when they simply do things for each other, either keeping a record of time/effort spent or not, than if they do things for money. Relations between communities are strengthened when they continuously barter a range of goods and services rather than use money. The latter can lead to imbalances and hostility, whereas the former is always in balance.

By reducing our dependency on the money grid we can create more resilient communities, reduce our dependency on other failing, centralised grids that are used to monitor, control and exploit us, and at the same time create friendly, self-supporting networks that will allow us to live free of the grids in the hard times ahead.